Be careful when attacking! If you fill the Curse Bar, Alastor dies instantly.

This was fun. How long did it take to draw?

Thanx! I did everything in a month, during gamejam

this game is good, it has great potential. You should definitely make a full game out of it!

I'm glad you liked It! Thanx!

how do you kill the tentacle boss? i literally cannot hit him when he slams in the ground or when hes in the air

You need to jump and hit his head when he goes down, the weak point of all enemies is the red orb. It seems difficult but you quickly get the hang of it, good lucky! ;)

At the first boss, if you die at the same time at the boss the game crash// Good game

This game looks incredible! I would love to know, however, if a gamepad can be used with this game.

I liked it, but the jump is horrible, I prefer to press the button and that the character jumps high rather than having to stay pressed to jump very high.

I understand, but for games where you need to dodge, having a variable jump helps a lot. Thanks for the feedback :)

Stand in front of the boss, jump and hit the chest without advancing, so only the sword hits him and you don't touch his body. If in doubt, look on You Tube or here in the comments for videos of other people beating the boss.

Love the gameplay! But I have a request and its to add a mouse input for attacking and other stuff

Thanx for the feedback :)

Absolutely amazing game dude! Love the art and also you struck the perfect balance between hard and fair. Great job!

Thanx for the feedback! I glad you liked! :)

Game was super fun! I'd love the option for a new game plus. Would be great to take on all the bosses again with a double jump.

Really, really great game. Runs great in browser as well. Only thing for me (like others have said) is more input options. Would love to be able to use mouse input for attack/jump.

Hello, could you put other key than "x" and "z" to play. It's hard with the swiss french keyboard layout. Best Regards

I'm working on a way to make the inputs configurable, as soon as I get it I'll do an update to implement.

Game looks cool. Does it have controller support?

Yes, You can select joystick Control in OPTIONS screen.

I think there was a problem for the itch.io downloading client. It works fine on the website

At first it looks ok, try it with some other game I made to see if it works.

See, and yeah, it happens to other windows builds as well 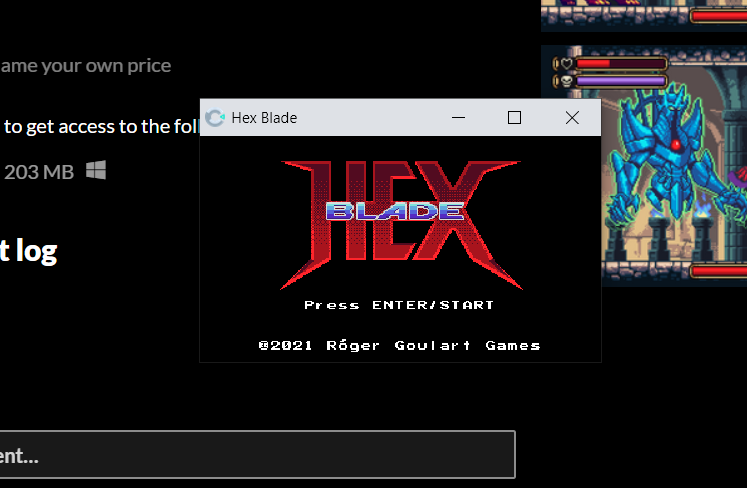 The game's original resolution is 320x180. You must click the button in the upper right corner (the square) to resize in full screen.

When I downloaded the game, the window is too small to play. Like half of the size of window where play button is there

Very strange. Try downloading another game from my list and see if the same happens.

You can also have an easy mode

This is a really well-made game. It is also very hard

Thanx for the feedback! :)

When player and boss 1 died, and the game went into a cut scene. When the cut scene was over, the player was stuck. (Maybe because he had died but game over didn't happen in the cut scene)

But overall, It is a nice game.

Thanx for the feedback, I'll check out!

Can i alter the controls?

The art is insane. I can't imagine what it takes to make that happen.

Thanx a lot for the feedback! :)

-CONTAINS SPOILERS FOR THE BOSSES IN THE GAME-

This was a very visually polished game, and it was for the most part, enjoyable to play. I also really like all the different boss designs, it makes each boss really unique and different from each other. The first boss is designed pretty well from a gameplay standpoint, and the second boss is really good as well. But the third boss is a bit confusing on how to attack it, because all the other bosses up to this point had specific times where they would be vulnerable where they would let the player attack them. It took me a really long time to figure out you have to attack the head when it goes down, because I thought you were supposed to do something with the electrified state to attack it. (I didn't realize the thing where you have to attack the red dots on the enemies yet) I think the electrified state should be reworked or removed, as it's pretty confusing at first. It took me a while of testing it, and trying to trigger the electrified state to hit it in the air, or hit it's lightning bolts back at it, but it just didn't work. I eventually accidentally attacked it's head while trying something else, but it was just not as fun as the game had been up to this point. The fourth boss was actually really fun, but I think it's purple ball ability is the only hard attack it has, the other attacks are really easy to dodge or cheese. The final fight is honestly really good, the music is good, and I like how you can attack the knives to make them disappear. The combined attacks are hard to dodge, but never unfair. His teleport thing is a bit annoying, but manageable. My final complaint with this is the fact that if you die to one of the boulders, you have to restart the entire final boss fight. I barely finished the fight, and the boulders caught me by surprise and I realized that I had to do the entire fight over again, which was really annoying. All in all, good game, I would definitely buy a commercial version of this, but it just needs a couple balancing tweaks and maybe communicate to the player at the start of the game through text to attack the red dots on the bosses? So yeah, that's it, great job.

you did a really good job on this one. do you plan on continuing to work on it?

it would be great to turn in to a linear castlevania style (cv 1/3, not open metroidvania style) and have a "boss rush mode" that nods back to it's origins as a jam game.

I liked the game! Some things to improve on:

I would remove the insta-kill sword, and replace it with a roll or something.

That would make the game more fun. Overall though, I enjoyed the game.

Thanx a lot for the feedback! :)

are you working on the second one or is it already out?

I'm working on a definitive version of the game with stages for each of the bosses.

This was a very fun game! I definitely liked the polish given to the art and movement. Everything felt great when I moved around and performed attacks. However, I had some difficulty with the flying boss, and it felt more like a waiting game than anything else. The third boss was also beaten rather quickly by spamming certain attacks (I can't remember because I beat the game a few weeks ago). I do see that this is a work in progress though, so I'm looking forward to any updates!

Thanks for the feedback! :D

hello, when i open the game, it says "successfully updated icons for the following executable files: win32/hex blade.exe
win64/hex blade.exe" can you please help me fix this? thank you.

Strange, I don't know what could be causing this. I'll upload a new version of the files to see if it works. Thanks for reporting the issue.

The same is happening to me.

I suppose you are using the itch launcher, go to the folder in wihch the files were downloaded, go into either win32 or win64 and launch “Hex Blade.exe” (the same happened to me)

Thanx for the feedback :)

I'm still seeing how to do this, but as soon as I get it I'll make it available :)

The weak point of all enemies is the red dot. For the third, you must hit his head when he attacks coming down. Good lucky! ;)

Even though the art is impressive and the whole game has a nice arcade vibe. I just found the flying boss with the tentacles as more of an annoying encounter than something enjoyable. Especially as he was just sticking up in the air all of the time shooting lightning bolts and I had no way of reaching him than dodging these extremely easy to dodge lightning bolts and waiting for him to come down.
It's definitely a boss fight I would be fixed on going through if I was interested in figuring out what's going to happen next- but overall it was just frustrating enough to make me stop playing.
Also, I hated how the Jump button was on the Z button instead of the up button.

This version of the game was made quickly for a gamejam, I'm working on a balance for the bosses, including a ground attack for this flying enemy. There will also be stages between bosses, just like in a normal game. As for Inputs, I'll make a few more options for those who don't like to use Z,X. Thanks for liking the arts and for the feedback. 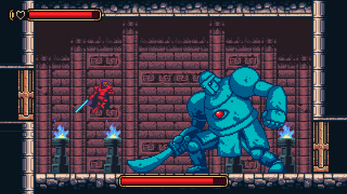 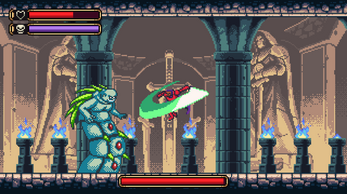 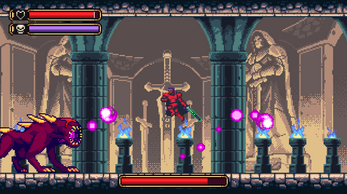 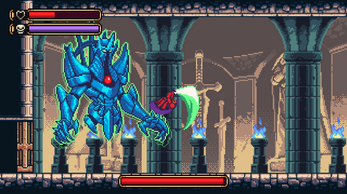